“We have experienced absolute stability from SYSPRO 8. I have no hesitation recommending this upgrade.”

Formed in 1963, Supreme Spring is engaged in the design, manufacture, marketing and supply of quality heat-treated steel automotive components (namely, coil springs, stabilizer bars, torsion bars and leaf assemblies) to the South African and international automotive market. From humble beginnings, the company has grown into a cuttingedge organization in which the use of computer-controlled operations has become standard practice. As part of the JSE-listed Metair Group, Supreme Spring’s products are exported to the UK, India, Thailand, Japan, Australia and Europe, where it is recognized as a supplier of quality products at competitive prices.

Supreme Spring has been a satisfied SYSPRO customer since 2007 – originally deploying SYSPRO 6.0 after discovering that sister company, automotive component manufacturer Lumotech South Africa, was using SYSPRO ERP software. At first, Supreme Spring adopted a ‘if it ain’t broke, don’t fix it’ attitude to SYSPRO’s latest release, SYSPRO 8. Soon it became apparent that the benefits of keeping up with the latest technology and the ability to future-proof their business far out-weighed any other reservation they had regarding the upgrade.

Initially, when Supreme Spring decided to upgrade, their first instinct was to begin with SYSPRO 7. On the advice of SYSPRO partner, EOH, the company resolved to move straight to SYSPRO 8. Once the pre-conversion was complete, the conversion took place on a Friday evening outside of operating hours, ensuring that the organization had no down time during the upgrade.

By leapfrogging over the earlier release, the company is able to enjoy all of the new capabilities available in SYSPRO 8, along with the improvements made in SYSPRO 7. 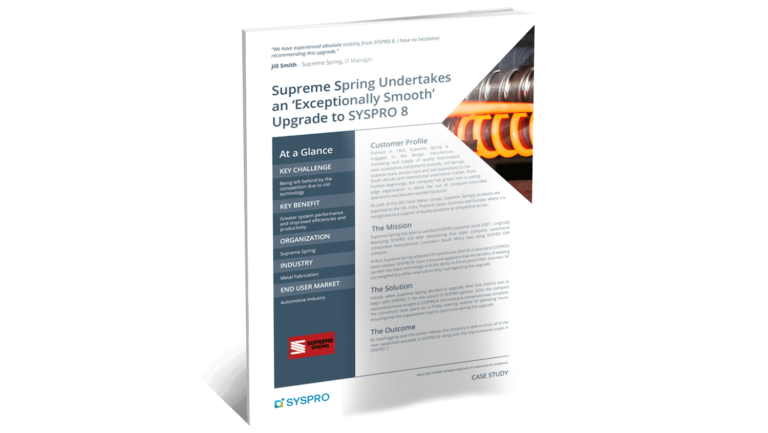 Myths and Truths of ERP