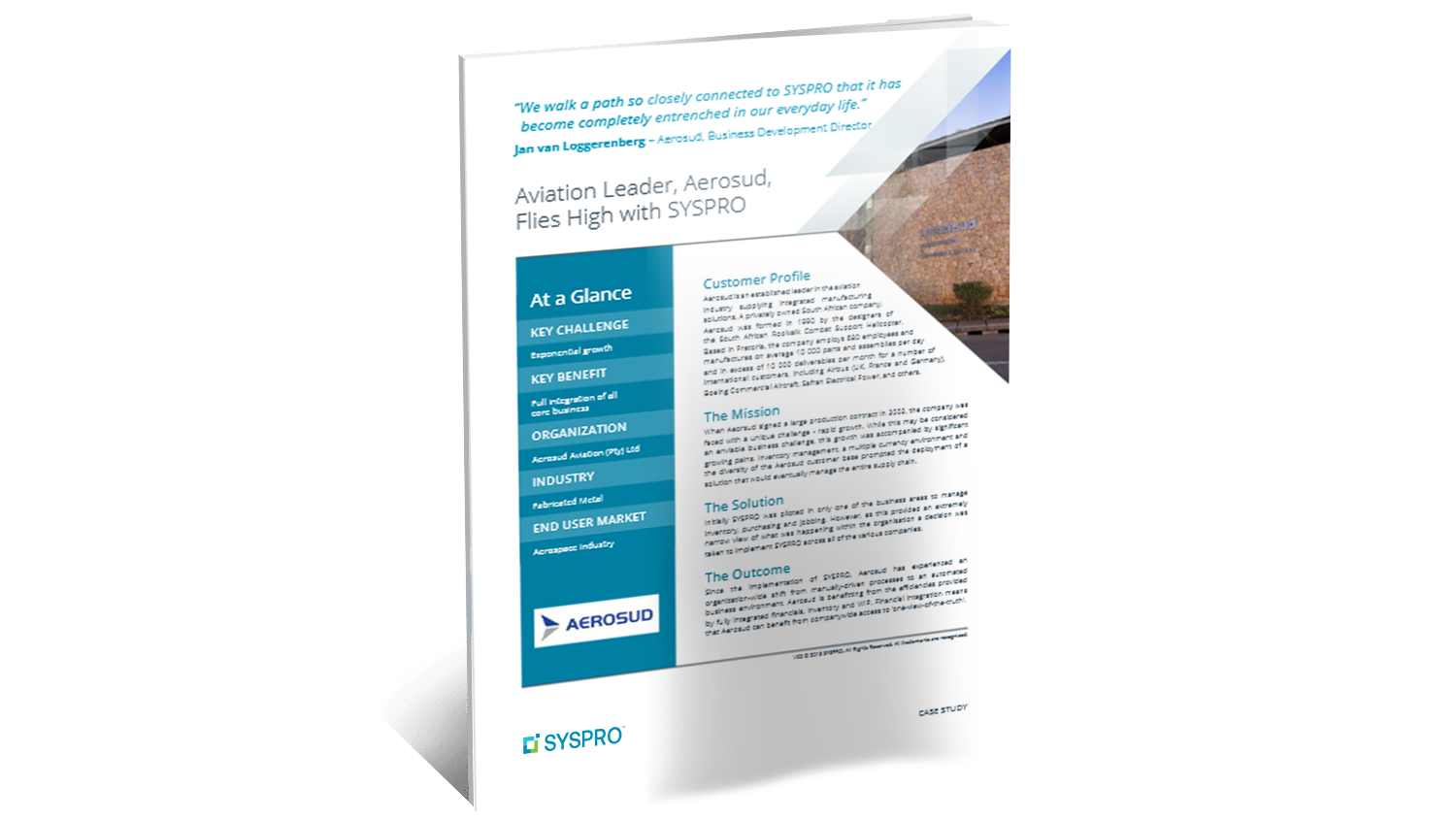 “We walk a path so closely connected to SYSPRO that it has become completely entrenched in our everyday life.”

Aerosud is an established leader in the aviation industry supplying integrated manufacturing solutions. A privately owned South African company, Aerosud was formed in 1990 by the designers of the South African Rooivalk Combat Support Helicopter. Based in Pretoria, the company employs 680 employees and manufactures on average 10 000 parts and assemblies per day and in excess of 10 000 deliverables per month for a number of international customers, including Airbus (UK, France and Germany), Boeing Commercial Aircraft, Safran Electrical Power, and others.

When Aeorsud signed a large production contract in 2002, the company was faced with a unique challenge – rapid growth. While this may be considered an enviable business challenge, this growth was accompanied by significant growing pains. Inventory management, a multiple currency environment and the diversity of the Aerosud customer base prompted the deployment of a solution that would eventually manage the entire supply chain.

Initially SYSPRO was piloted in only one of the business areas to manage inventory, purchasing and jobbing. However, as this provided an extremely narrow view of what was happening within the organisation a decision was taken to implement SYSPRO across all of the various companies.

Since the implementation of SYSPRO, Aerosud has experienced an organization-wide shift from manually-driven processes to an automated business environment. Aerosud is benefitting from the efficiencies provided by fully integrated financials, inventory and WIP. Financial integration means that Aerosud can benefit from companywide access to ‘one-view-of-the-truth’.

Between 1990 and 1998 the majority of Aerosud’s contracts were focused around the South African military market. In 1995, however, Aerosud expanded into the international military market and by 1997 had diversified into the commercial aviation market. By 2000, Aerosud had embarked upon a major expansion of its production capacity.

In 2003, with a consignment stock valued at $3.5 million, the reality of their inability to manage this stock became apparent. The company’s finished goods inventory, made up of an average of 4 000 parts each, required individual invoices and delivery documentation. The high variability of type and number of parts meant that individual invoices and delivery notes had to be manually processed and reconciled which was extremely timeconsuming.

In addition, Aerosud’s customer processes vary significantly and each customer requires customization of their paperwork to suit their individual business processes. Since 95% of Aerosud’s customer base is made up of international businesses, a large number of currencies are involved in the sales cycle. Prior to SYSPRO, these currencies had to be converted manually.

“SYSPRO eliminated the manual processes that had become prohibitive due to the sheer volume and variety of our inventory,” explains Jan van Loggerenberg, Aerosud Business Development Director. “The flexibility of SYSPRO and its ability to integrate seamlessly and simply with our existing business systems and processes created an effective partnership that has provided exceptional support for our business as we have grown and evolved.”

A Platform for Best Practice

In 2015, Aerosud launched a big drive to imbed the Theory of Constraints (TOC) methodology as its management philosophy. This management paradigm identifies the most significant limiting factors impeding an organization from achieving success and focuses on systematically improving these constraints.

“SYSPRO forms the basis from which we extract the necessary information to support the TOC methodology. As we embed this philosophy into our business, SYSPRO has a significant impact on the validity and integrity of the data. We like to think of SYSPRO as the island where all of our relevant, useful information resides. All of the applications and screens that have been built in SYSPRO feed back and forth to provide a holistic view of our business,” says Van Loggerenberg.

When Aerosud upgraded to SYSPRO 7, they started to incorporate VBScripting more resolutely. Not only on user access control but also to guide users on selecting the right path in terms of which mode of operation they should follow. Aerosud even built additional screens such as a BOM application where their planners are able to input information and then receive validation. This application also surfaces Aerosud Aviation specific rules that need to be adhered to.

“Overall, our BOM structures are controlled via the BOM applications which is just VBScripting. We verify more and more between SQL and VBScripting and continually realign as our business grows. We have begun to code our business rules in SYSPRO as a result of its versatility. We refer to it as the ‘SYSPRO Aerosud Aviation version’,” says Van Loggerenberg.

Improved, user-friendly reporting allows the management team a multi-dimensional view across the business. The organization now has the ability to close the loop and have a complete view of supplier performance. This is essential because the original equipment manufacturers (OEM’s) are known to drive price aggressively.

Additionally, as a result of SYSPRO, Aerosud has the ability to access the necessary information for business assessment reports. This enables the organization to prove traceability of the system and production.

“It is without a doubt our entire procurement environment, including receiving, stores, inventory and dispatch, that has experienced the most substantial improvements since the deployment of SYSPRO. However, this does not detract from the numerous benefits that have been exposed in all of our other business areas,” concludes Van Loggerenberg.

Below are quick links based on your search results